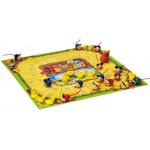 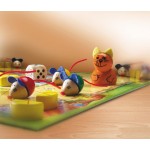 Players attempt to advance their mice (pieces) from the start to any of various goals. The further the goal, the more cheese (points) it is worth. Pursuing the mice is the cat that removes the mice from the game should it catch the mice. Movement is regulated by a die which has 1/1/2/3/4/5 on the sides. The "1" sides also move the cat. Initial cat moves are only 1 space, but become 2 spaces after once around the track, so when the cat speeds up, it's almost all over! Viva Topo! is a family game that has players balancing risk and rewards as they attempt to outrun the cat and score for cheese. Charming artwork on the board. Delightful wooden cat, mice, cheese, and oversized die. Rulebook in several languages, including English. Recommended for ages 4 and over.

"It looks great, has some interesting decisions to make for the target audience (4-8 year olds) and it plays quickly enough to ensure that boredom doesn't set in." - BGG user Neil Thomson

"This game is a blast to play with mixed group of adults/children." - BGG user Stephen Brewbacker 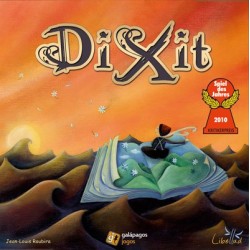