We will be out of town! Delivery will only take place from 18th Dec 2019 onwards.
Home » Pandemic
Categories

In Pandemic, several virulent diseases have broken out simultaneously all over the world! The players are disease-fighting specialists whose mission is to treat disease hotspots while researching cures for each of four plagues before they get out of hand.

The game board depicts several major population centers on Earth. On each turn, a player can use up to four actions to travel between cities, treat infected populaces, discover a cure, or build a research station. A deck of cards provides the players with these abilities, but sprinkled throughout this deck are Epidemic! cards that accelerate and intensify the diseases' activity. A second, separate deck of cards controls the "normal" spread of the infections.

Taking a unique role within the team, players must plan their strategy to mesh with their specialists' strengths in order to conquer the diseases. For example, the Operations Expert can build research stations which are needed to find cures for the diseases and which allow for greater mobility between cities; the Scientist needs only four cards of a particular disease to cure it instead of the normal five—but the diseases are spreading quickly and time is running out. If one or more diseases spreads beyond recovery or if too much time elapses, the players all lose. If they cure the four diseases, they all win!

Pandemic uses Standard Card Game sleeves. The following sleeves have been tested and found to fit:

My First Games : The best toy store and board game store in Singapore! We sell boardgames and toys that even adults have fun playing. This encourages parents to spend more time with their children, having fun! Even better, when parents play board games with their children, the children are engaged, they learn to listen to and abide by rules, and their concentration span is lengthened. Just play with your kids, already!
Tags: pandemic, adults
Related Products
Add to Wish List
Add to Compare 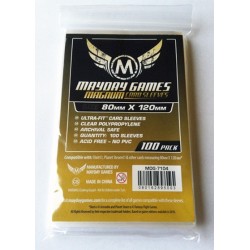